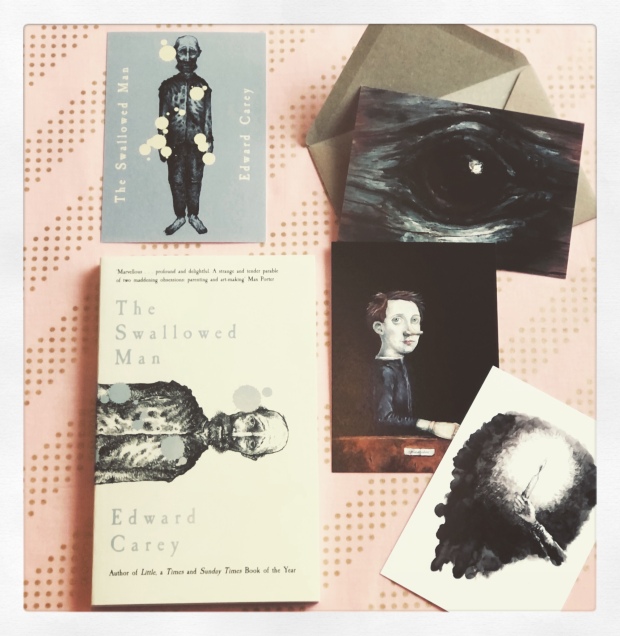 The Swallowed Man by Edward Carey

Available from all Good Bookshops and Online

From the acclaimed author of Little comes this beautiful and haunting imagining of the years Geppetto spends within the belly of a sea beast.

Drawing upon the Pinocchio story while creating something entirely his own, Carey tells an unforgettable tale of fatherly love and loss, pride and regret, and of the sustaining power of art and imagination.

I was lucky to read Edward’s novel Little before it was published, and it has since that time always had a special place in my reading heart, because it was such a perfectly written and absorbing novel.

When I heard that his next novel The Swallowed Man was about Pinocchio’s father Geppetto imprisoned inside a sea beast, I just didn’t know how it could compare to Little.

In fact, and to be completely honest with you, when I finished it, I wasn’t sure how I felt about it. Then I sat and thought about what I had just read, and slowly realised just how powerful and incredibly poignant it really is.

Geppetto, after losing his son Pinocchio who has run away from him, had taken a boat to try and find him after an alleged sighting. That is when he is swallowed by a sea beast and wakes up to find he is a prisoner inside the animal with no way of escape.

Little by little, Geppetto starts to tell us the story of his life as he tries to navigate his new home. He finds a whole ship inside the sea beast which gives you an idea as to the scale of the world he now finds himself in. This becomes his place of safety. He raids the ship for supplies, takes over the Captain’s rooms, and starts to write down everything in an attempt to keep his mind focussed on his plight, and his belief that one day he will find a way out.

As the novel progresses, he starts to reminisce, and look back on the life he has led, the women he has loved, and most importantly, the life he created. He made Pinocchio out of wood, so that he could say he was a father. What he didn’t anticipate was Pinocchio’s free will, and his desire to be like the other boys he saw from the windows of his home.

This is what Geppetto found so hard to understand. He had created his son, but wanted to control him, and when he couldn’t, he punished him and made Pinocchio so miserable that he ran away.

For me, this was the theme that ran so clearly through the novel. How that at the heart of this story is a man who realises not only what he has lost, but also by losing Pinocchio, what being a father actually means. He now understands that not only did he need a connection to someone, but that Pinocchio also needed other human connections to flourish too.

Little by little Geppetto loses his grip on reality, and wracked with grief he tries to make other Pinocchios to try and ease his pain. They never turn out the same, and are often grotesque. He believes one of them is actually haunting him, and his descent into madness becomes more painful to witness, and his journal entries become increasingly erratic.

The Swallowed Man may be a short novel, but it is intensely affecting. As a reader we suspect that Geppetto will not survive his ordeal, but Edward makes you engage so much with him that you are hoping for a miracle, and that the father and son will be reunited. The incredible illustrations by Edward throughout the book really gave the story an extra dimension, and made Geppetto feel more authentic as well as giving the reader that connection to him.

If you are looking for a rose tinted retelling of the Pinocchio story you knew as a child, this is not for you. However, if you want to read a story about the immense power of love, loss and the instinctive need we have to connect to someone to feel human, this is the book for you.

Thank you so much to Isabelle at Gallic Belgravia for my gifted copy in exchange for an honest review.