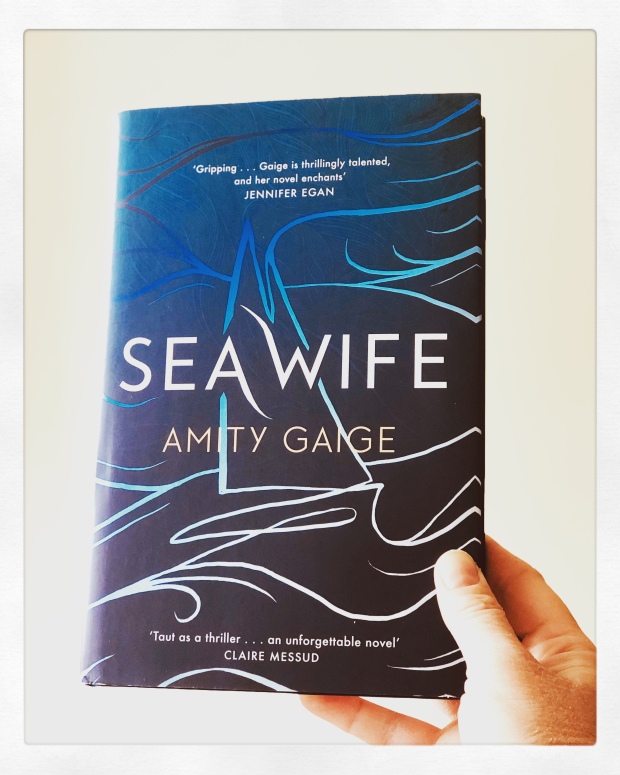 Available online and at All Good Bookshops

Juliet is failing to juggle motherhood and her anemic dissertation when her husband, Michael, informs her that he wants to leave his job and buy a sailboat. The couple are novice sailors, but Michael persuades Juliet to say yes. With their two kids – Sybil, age seven, and George, age two, Juliet and Michael set off for Panama, where their forty-four-foot sailboat awaits them – a boat that Michael has christened the Juliet.

The initial result is transformative: their marriage is given a gust of energy, and even the children are affected by the beauty and wonderful vertigo of travel. The sea challenges them all – and most of all, Juliet, who suffers from postpartum depression.

Sea Wife is told in gripping dual perspectives: Juliet’s first-person narration, after the journey, as she struggles to come to terms with the dire, life-changing events that unfolded at sea; and Michael’s captain’s log – that provides a riveting, slow-motion account of those same inexorable events.

“I had held myself together all my life. Then I became a mother, twice, and I was not fine. I was the opposite of me.”

When I heard about Sea Wife, I was really interested to read it, because for me, a life on the ocean is one that I have never contemplated nor ever experienced.  I also thought it was interesting that the title immediately categorises Juliet, the main character  in such a powerful and definitive way.

At first glance, it might seem like Juliet and Michael have it all  – a home, two children and a life that they have constructed for themselves that satisfies what everyone in their social circle expects. They are the epitome of the American Dream. Michael works for an insurance company, and Juliet, a poet, is attempting to complete her PhD.

Unfortunately, beneath the veneer, Juliet and Michael are struggling. Both with their own emotional state, and their marriage. Juliet suffers from depression and has also suffered sexual abuse as a child and now her ‘ugly angels’ torment her, and and she is plagued by the feeling that she simply is not fit to be a mother. Michael feels trapped in his job, and is increasingly realising that he needs to do something to help Juliet and to try and open communication between them before their marriage disintegrates.

Michael’s decision is to buy a boat which he renames Juliet – something he later discovers is regarded by those in the sailing world as a bad omen.  He has to then persuade Juliet that by taking a year off, and having their children Sybil and George with them, that this is just what they all need to try and find their way back to each other.

The novel is told from a dual narrative perspective – via Juliet’s memories and the Captain’s Log that Michael keeps whilst on board.  Stylistically and linguistically it also creates two distinct stories for the reader as Michael’s writing is in bold and to the right hand side of the page, and Juliet’s is more free flowing and lyrical and it seems more at times to be a flow of consciousness. As the voyage progresses, it is interesting to see how Michael becomes less analytical and logical and instead uses his journal as a way of not only tracing his relationship, but also gaining a deeper understanding of the issues and divides within their marriage.

As they undertake their voyage, it seems like Michael was right, and that in moving away from the constraints they have so strictly adhered to, that Juliet and Michael are slowly able to see the person they fell in love with.  All the time, Amity ensures that the ocean is an ever present and omnipresent force.

At times it is passively part of the backdrop, which makes Michael and Juliet feel that they are in control and have done the right thing in coming away together.  However, they are also reminded of how dispensable and unimportant they are in the world when they have to tackle the storms and ferocious unpredictability of the sea.  It is those times that their marriage is most put to the test as Juliet has no experience of sailing and she is totally reliant on Michael’s knowledge to keep them all safe.

They may be on this voyage as a family, but the limited living space and emerging tensions in their marriage mean that as time passes, Juliet and Michael finally start to see each other at their most open and honest. They realise that politically they are poles apart, that Michael has secured a loan for the boat against their house, and they start to wonder whether they really have a future when the voyage is over.

Then Michael falls seriously ill, and Juliet is forced to make a decision that alters the course of their lives forever, and it ultimately means Juliet has to face the reality of her marriage and confront her own mental health issues too.

Sea Wife is an emotionally challenging and taut novel that will make you think about the relationships with those people closest to you, and how much we take for granted in the way we seamlessly go about our daily lives together. For Michael and Juliet, they chose to embark on this seemingly idyllically journey in an attempt to salvage their fractured marriage. Amity Gaige’s intriguing and realistic portrayals of Michael and Juliet’s world in all its brutal and unfiltered reality, make us understand that we may never truly know the person closest to us until we have no choice. Sea Wife also unapologetically makes us realise, that perhaps we never really knew them at all.

Thank you very much to Grace Vincent at Fleet for my gifted copy of Sea Wife in exchange for an honest review.

Please do see what the other bloggers on the tour are saying too..