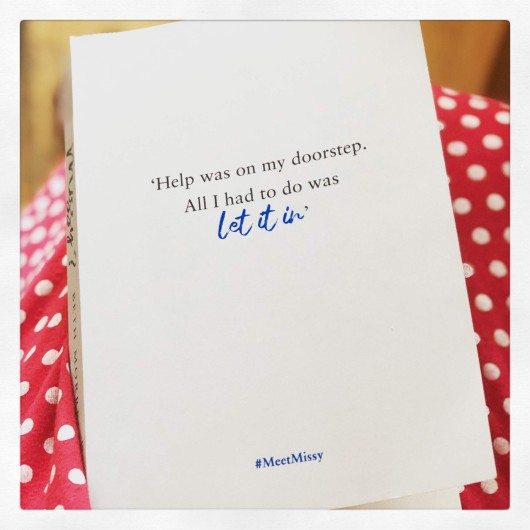 Available from all good Bookshops and Online from 6th February

Grieving for a family she has lost or lost touch with, she’s haunted by the echoes of her footsteps in her empty home; the sound of the radio in the dark; the tick-tick-tick of the watching clock.

Spiky and defensive, Missy knows that her loneliness is all her own fault. She deserves no more than this; not after what she’s done. But a chance encounter in the park with two very different women opens the door to something new.

Another life beckons for Missy, if only she can be brave enough to grasp the opportunity. But seventy-nine is too late for a second chance. Isn’t it?

“But I still felt it somewhere – that spark. The beginning of something. Or the end. Who knows?”

There is as always, a bit of a back story to my choosing Saving Missy to review (not a long one I promise!). Some of you will see me frequently talk about LoveReading on my Twitter and Instagram feeds, and wonder what they are. In the simplest terms, if you sign up to them, you get the chance to read and review the latest releases in return for posting a review. I should also say that this is not an ad for them, and that all they have done so far is to supply me with fabulous books! Anyway, the always fabulous Liz Robinson of LoveReading sent me a copy of Saving Missy last year, and of course I am not going to spoil the ending, but let me tell you, there were quite a few DMs exchanged between us as to how wonderful Saving Missy is.

Why? I am going to go out on a limb here, and tell you that Saving Missy is already going to be on My Most Selfish Reads of 2020 – because it’s that brilliant.

How to tell you about Saving Missy without saying too much is difficult, but this is what you need to know about the story. Missy Carmichael is a 79 year old woman, her husband Leo is no longer at home, and her children Alistair and Mel have grown up and moved out.

The thing is, Missy now rattles around a large house in Stoke Newington, and just exists in a constant state of following the same routines she always has, often not speaking to anyone from day to day. One day, on a trip to the park, she encounters Angela and Otis, a Mum and son who have come to watch the fish being moved out of the park’s pond. After Missy has a fall, and people rush around her to help, she fades into the background once again. Except she keeps meeting Angela and this time, Angela needs her help to look after a dog called Bobby that she has inherited.

Little by little, Missy finds herself in a situation where she has to start to let people in to her life, to understand that by making connections with the outside world she will start to live the life she really deserves. That may sound melodramatic, but to simply say that Saving Missy is a light hearted feel good novel does no service to the novel or to Beth Morrey.

Saving Missy is a novel that totally resonated with me on so many levels. The notion of Missy always as Leo’s wife, Ali and Mel’s Mum, means that her identity has been shaped by the needs and demands of those around her. Little by little, she has lost herself along the way, and all her hopes and dreams had to be put to one side as she focussed on helping her family thrive. I thought it was interesting to see how in her marriage, her intelligence and passion for learning had to be quashed in order to ensure that her husband is the head of the household. I know so many women who have done the same thing, and the level of frustration and invisibility they feel is more and more evident.

As Beth Morrey goes backwards and forwards in time so you can unravel Missy’s story, it helps to underline how frustrating and unheard so many women were. They had to make a choice, family or career, and those who chose the latter were seen as having made an unnatural choice. This device added an extra layer to the novel, as you were really able to see Missy completely, and how the choices she made and those she was pressured to make, made her the woman she is now.

I thought it was also really interesting to see how Missy’s house is always the ever present place at the heart of everything. First a place to be with her husband, then as a family home, and finally as almost a place where she can escape to when the world gets too much, but it’s also a claustrophobic and lonely place too sometimes. It is only by having the courage to step outside it, and to let people in that she can really start to live again.

In lesser hands, the character of Missy could have been a stereotypical lonely old lady, which would have grated and meant that I didn’t engage with the story at all. Beth Morrey is so adept at making Missy a real, relatable and interesting woman, that you can’t help but absolutely feel you need to see what happens. I loved Angela too, she is such a fabulously unapologetic character, who is doing the best she can, and I wish that authors would do this more often – we need to see people who are not Instaperfect mothers, and who are simply happy that their kids make it through each day!

As Missy gets more and more involved with the world around her, she starts to finally open up to them, and as a result, Missy becomes part of their world as much as they become part of hers. The story moves at a perfect pace, and to say too much would give it a way, but Beth writes so perfectly that the plot is seamless, and it’s simply one of those novels that you lose yourself in.

Saving Missy is quite simply a novel you need to read – especially in a world where at times everything at the moment seems so bleak. It is a perfectly pitched and executed novel about a woman who has almost given up on the world around her, but the kindness of the people who live so close by bring her back to life. It is a book that tackles huge issues such as illness, grief, loneliness, love and sexuality, but not for one moment do you feel like you are being preached to.

It is a glorious, kind, loving and special novel that will resonate with so many readers, and makes us think how the smallest actions we take, can have the biggest impact on those who feel they are invisible and unloved in the world around us.

I absolutely loved it – and I hope you do too.

Thank you as always to Liz Robinson and Charlotte Walker at LoveReadingUK for my gifted copy.