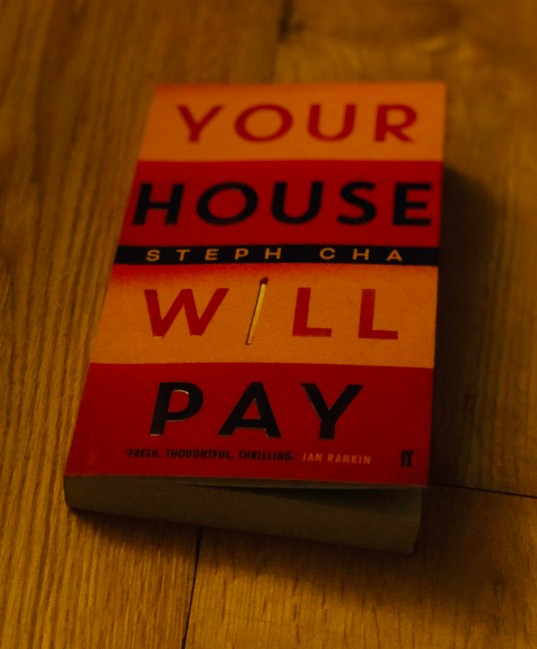 Steph Cha – Your House Will Pay

Published By Faber and Faber on 16th January

Available from all good Bookshops and Online

Grace Park and Shawn Mathews share a city – Los Angeles – but seemingly little else. Coming from different generations and very different communities, their paths wouldn’t normally cross at all. As Grace battles confusion over her elder sister’s estrangement from their Korean-immigrant parents, Shawn tries to help his cousin Ray readjust to city life after years spent in prison.

But something in their past links these two families. As the city around them threatens to erupt into violence, echoing the worst days of the early 1990s, the lives of Grace and Shawn are set to collide in ways which will change them all forever.

Beautifully written, and marked by its aching humanity as much as its growing sense of dread, Your House Will Pay is a powerful and urgent novel for today.

“Yet it came with a heightened awareness of all that had brought them here, the past clinging to them in thin, sticky layers”.

To try and review Your House Will Pay is a difficult task, not because of the novel itself, which is filled with the tension and pain that permeated 1990’s Los Angeles and its aftermath, but because it is impossible to adequately convey the passion and emotion that Steph Cha has poured into her work.  It examines hugely emotive issues such as race, violence, family and retribution, but does so in a way that never feels didactic.

On the surface, this story of two families in Los Angeles seems at the start to be disconnected.  Why are we learning about what Shawn Matthews and Grace Park are going through, what could possibly link these two seemingly incredibly disparate families? What happened in the 1990’s that could possibly bring them together? The timeline runs between 2019 and the 1990’s and by moving back and forth, we start to understand the realities for Korean and black families living in Los Angeles at that time. It was also an education for me, and I spent some time reading about what happened to try and appreciate more what life at that time was like.

Grace’s Korean family now run a pharmacy, and are apparently settled in their ways and lifestyle, while Shawn who comes from a black family have a chaotic and chequered past which has resulted in him and his cousin Ray spending a lot of time in prison, and his sister has passed away.

Although these two families seemingly have nothing in common, as a reader, you initially feel that slightly disorientated by the switch in focus and storyline.  The absolute skill that Steph has, is that she takes away any pre-conceptions or stereotypes you may expect, and brings the families down to the most basic level. They are simply people who are there for us to see with all their flaws and faults. The issues that the families are going through are set against the backdrop of a world where there are constant tensions between different cultures, and the Korean and black communities are at odds with each other.

In both worlds there is prejudice and inequality – there is a sense that the tensions that are always present in the everyday world are ready to explode at any moment, and you feel it in every page you read. You know that events of the 1990’s Los Angeles has had wide ranging and life changing effects for these families, but you don’t know what they were.  The ever present and all consuming city of Los Angeles is the one constant in this mesmerising and absorbing novel. As the narrative switches between Shawn and Grace, you not only feel that you are slowly starting to understand the very different families, but that there is a constant sense of something seismic about to happen.

Grace is an educated and intelligent woman, who lives at home with her parents, seemingly stuck between trying to please them and be a good daughter, whilst at the same time being aware that there is so much more to the world if she would only have the courage to embrace it.  Her sister Mariam, has been estranged from her parents for a while and lives with her elder boyfriend free from their expectations.

Shawn on the other hand, has become almost a surrogate father to his cousin’s children, and looks after Ray’s family as almost a penance for the life he lived before.  He had a troubled childhood as he attempted to fit in with a world of gangs and crime, and his loyalty to his friends and their beliefs meant that he ended up in prison.  Since his release, he has been determined to ensure he doesn’t make the same mistakes, and is trying to educate Ray’s children so they too can make the correct choices.

For me, what I really enjoyed about Your House Will Pay was the immersive way you are drawn into Grace and Shawn’s world. It addresses the realities of being a young person in a world where you don’t quite fit, and that others expectations mean the choices you make can have a huge impact on not only your world, but those who live in it with you too.  They are people you really believe in, and the way in which we follow their lives serves to underline not only the huge differences between them, but also how similar their beliefs and concerns are.

To try and review this novel is a complicated task, because it is so many things in one book.  When the devastating connection between the family is revealed, trust me, it is one of those jaw-dropping chapters you dream of as a reader! It is thrilling, unexpected and almost like a crime novel as you try and work out who could have done what and when.  However, for me, always at the heart of this book is the notion of family, of belonging.  The secrets they hide in order to protect others, the unspoken bonds that mean it comes before everything, and how your world can be turned upside down by the people you thought you knew the best.

From the moment where we find out how the two families are known to each other, it is a compelling novel that has you turning the pages trying to decide what possible resolution there could be.  I loved the balance between the 1990’s and the modern day, the fact that as a reader you are looking for clues, any little thing you can ascertain that will bring you closer to understanding what has happened and why.

The characterisations are always well rounded and serve to bring you closer to the novel because you really feel invested in what happens to all of them, irrespective of what they have done. There are so many touching familial scenes, acutely and perfectly observed, cut through with reality and humour, with nuances and in jokes that every family has.  This is also what helps to drive the story forward, as you really care what has happened and will happen to the Matthews and Parks.

Your House Will Pay is a timely and devastating novel, that works so well because Steph Cha has created a world where your connection to the characters and the plot mean you only want the best outcome for the Parks and Matthews family.  Who are we to judge the mistakes made by those closest to us when we are far from innocent ourselves? Surely, in times of crisis, the true notion of family and belonging is knowing that by forgiving and protecting those closest to us, we can truly be free. Your House Will Pay makes you stop and think, and want to understand why and what happened to these families. For me, that is truly a sign of a novel that has made a profound impact and changes and educates you as to your view of a world you naively thought you understood.

Many Thanks to Lauren Nicoll from Faber and Faber for a gifted copy of this book and for inviting me to take part in this Blog Tour in exchange for an honest review.

Have a look at what my fellow bloggers below are saying about Your House Will Pay.. 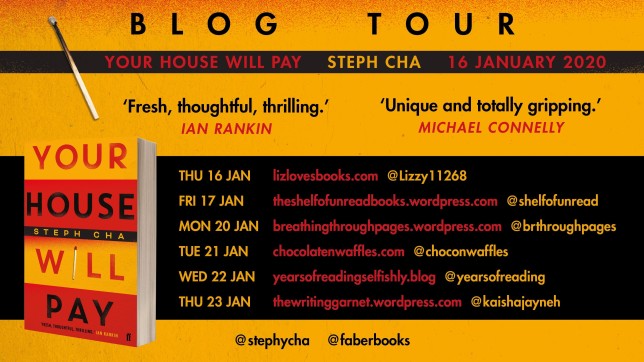