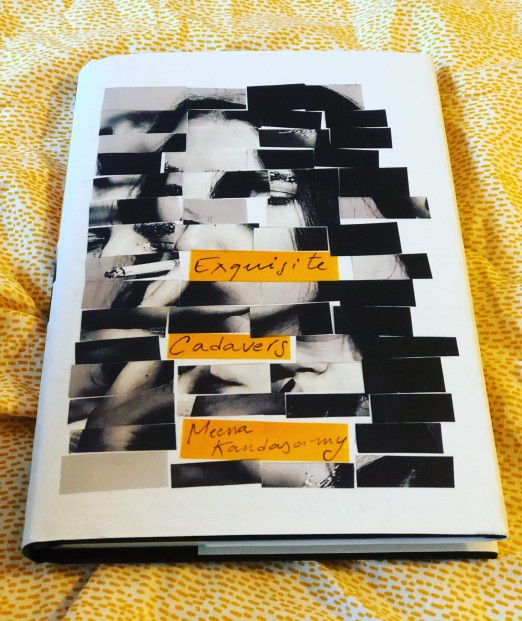 Available from all good Bookshops and Online

Karim, a young film-maker, carries with him the starry-eyed dreams of the Arab Revolution. Maya carries her own pressing concerns: an errant father, an unstable job, a chain-smoking habit, a sudden pregnancy. When Karim’s brother disappears in Tunis, and Karim wants to go after him, Maya must choose between her partner and her home city, her future and her history…

In a conversation between forms, fictions and truths, Exquisite Cadavers is a novel about a young couple navigating love in London, and a literary hall of mirrors about an author navigating the inspirations behind her work.

I had read and loved When I Hit You, which was the first novel Meena had written. It was an honest and brutal exploration of a woman in an abusive marriage, and one that I thought about often after reading it.

For Exquisite Cadavers, right from the very first page, you are aware that this novel is one that will push the boundaries not only of conventional literature, but will also ask the reader to be much more involved and aware of the form of the novel than ever before. This novel is not a passive experience for the reader, and if you are looking for a book that conforms to a standard straightforward narrative, then this is perhaps not the novel for you.

I am going to be honest and tell you that initially on reading it, I had no clue as to how I could possibly articulate a review.

The novel is short, impactful, and filled with so much information and knowledge that it feels much longer. The format is like nothing I have ever read before. It has one narrative down the middle of the pages – that of Maya and Karim, whilst in the margins, Meena has written copious notes of her personal life, creative process and what is going on for her in her world as she constructs the novel.

The ingenuity of all this in my opinion is how you choose to read it. Do you read the main narrative and refer to the notes in the margins as you go along, or do you read the margin notes first, or the main narrative first? This is a process that made me stop and think – initially I read the main narrative and notes as I went along, but it was too disjointed for me, so I decided to read Maya and Karim’s story first, and then Meena’s notes. The interesting thing I found, was that I was completely immersed in both stories as I read them separately, but also felt a slight disconnection from Maya and Karim as I read Meena’s notes. I was very aware of how they were constructs of Meena’s imagination, and the influences she had imbued them with as she created them – because they are just that – creations of her imagination.

Maya and Karim are young, married and in love, he is a film maker and his attempts to try and document the world he wants to show are frustrated at every turn. His narrative is slowly edited by the tutors around him so that he works on what they believe he should talk about – no matter how contrived or stereotypical it might be, at the risk of him losing his place on the course. Maya works on a newspaper, but she is acutely aware of the domestic world she is now part of, and is energised by the freedom she has, but is also and Karim both have difficult relationships with their fathers too, and have been increasingly getting frustrated with each other as the day to day reality of marriage becomes more prevalent.

As the novel progresses, Meena’s voice also becomes clearer and informs Maya and Karim’s narrative too. When she feels she cannot relate to Maya, she decides that she will make her pregnant- just as she is in real life. I thought this was a very incisive device to ensure that the reader is aware that everything we read in Maya and Karim’s story is a construct of what Meena wants us to read. As Maya and Karim’s story moves on, we learn that Karim has his own way of viewing his wife – his knowledge as a filmmaker imbues the way in which he views her too.

I felt that throughout this novel , the notion of home and belonging was a strong theme throughout- both in Maya and Karim’s story, but also in Meena’s notations too. She references both her own journey to where she has settled today, but also talks about the reality for those family and friends who are in other parts of the world too. There are also lots of references to cultural and political events which, due to my lack of knowledge meant that I had to stop and research them before returning to the text and rereading them – but this time with a sense of awareness.

When Karim decides to return to Tunis to support his brother who has been wrongfully arrested, Maya stands at a threshold where she can stay at home and watch from afar, or she can make a life changing decision to follow her husband, breaking out of the domestic and social confines they have constructed. What I thought was really interesting was that Meena’s notes stop suddenly, bringing the reader immediately back to Karim and Maya’s story, and the stark reality of the decisions they have to make,

Without a doubt, Exquisite Cadavers was a novel at first I was intimidated by. I have to think why that was. I believe it was because it so pushed me out of my comfort zone that my first reaction was to stop. However, isn’t that what literature and reading is all about? To read things that bring new worlds and ideas to us, to challenge our preconceived ideas and to show us the world beyond our comfortable own?

Now I have had time to reflect on it, I think it is an extremely intelligent and thoughtful novel that makes us as a reader really engage with the words on the page, and think about the writer behind them too. The story of Maya and Karim may be the one we are immediately drawn to, as it is what our eye searches for as soon as we open the novel, but for me, the creative process and education I received by taking the time to read Meena’s notes in the margins, are what added the important and brilliant dimension to this work.

Exquisite Cadavers is a novel that demands your full attention at all times. It is breathtaking in its scope, and ambitious in its demands of the reader, but it is impossible to put down. In reading Maya and Karim’s story, we are also gaining a rare and intimate insight into the world of a writer, and for Meena to articulate that so openly and honestly means that we as readers are witness to a world we are all so often blissfully unaware of too.

Thank you very much to Midas PR and the Dylan Thomas Prize for asking me to take part on this Blog Tour in exchange for an honest review.

There are 65 other Bloggers taking part on this amazing Blog Tour for the Dylan Thomas Prize Longlist – why don’t you check out what they are saying too..