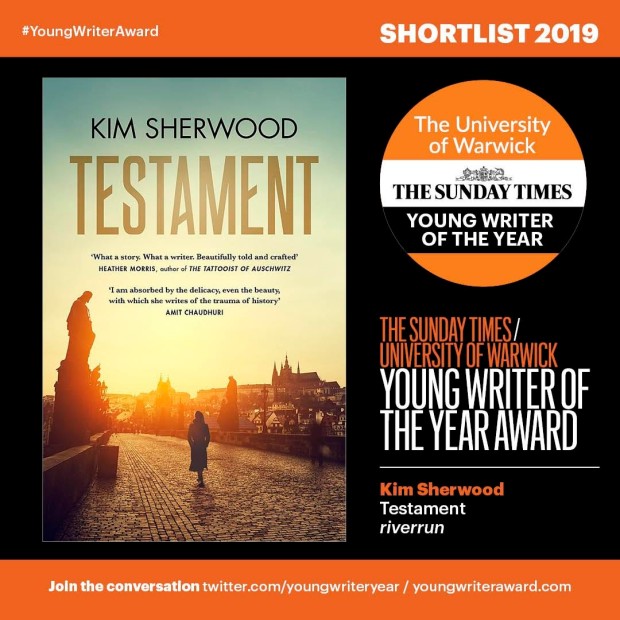 Available online and from all good bookshops.

The letter was in the Blue Room – her grandfather’s painting studio, where Eva spent the happier days of her childhood. After his death, she is the one responsible for his legacy – a legacy threatened by the letter she finds. It is from the Jewish Museum in Berlin. They have found the testimony her grandfather gave after surviving the labour camps in Austria. And, since he was one of Britain’s greatest twentieth century artists, they want to exhibit it. But Joseph Silk – leaving behind József Zyyad – remade himself long ago. As Eva begins to uncover the truth, she understands the trauma, and the lies, that have haunted her family. She will unravel what happened to József and his brother, who came to England as refugees. One never spoke of his past – the other couldn’t let it go. Their story – and that of the woman they both loved – is in her hands. Revealing it would change her grandfather’s hard- won identity. But it could also change the tide of history. This testament can lend words to wordless grief, and teach her how to live.

“It’s not a choice,’ László said “what’s a man without memory?’

To be asked to be a Shadow Judge for The Sunday Times/University of Warwick Young Writer of the Year Award is a huge honour, but when faced with the shortlist sitting in front of you, all of the books you cannot wait to devour, the issue is which one do you choose?

How will my choice appear to others – is there some reason why I chose this one and not that? Does that mean I was most keen to read the one I picked, or is it that I wanted to get the longest book read first?

I decided to read Testament, because I believed that I knew about the Holocaust and the Second World War. I naively thought my limited reading of a history textbook in sixth form could adequately educate me as to the impact and brutality of this war on the Jewish people and the world.

Testament is a novel that unapologetically shows you the human reality of war.  It is not on the battlefields or the war rooms that this novel’s war is fought, but in the towns and countryside, in the homes and the lives of those ordinary people who were at the mercy of the German soldiers.

Eva Butler is the granddaughter of the famous painter Joseph Silk who has recently passed away, and as her father John refuses to help, it is left to Eva to deal with his estate and possessions he has left behind.  Eva is a documentary maker, and before Silk’s death, they were in the process of making a film together about him. She has always been aware that he was once József Zyyad, a young Hungarian Jew who together with his brother László survived the Holocaust, but he refused to revisit that part of his history.

When Eva is going through Silk’s possessions, she finds a letter from the Jewish Museum in Berlin, who wanted to talk to him so they could add his testimony that he gave during the Second World War to create a history of those who were in the Holocaust.  Whereas László was now in a place where he wants to remember what has happened to him, Silk wanted no part of it.  He wanted to forget his life during that time, and any attempt Eva had previously made to try to get him to talk about his life before he arrived in the United Kingdom is ignored.

To say that Testament is just a straightforward novel about a woman’s search to discover the truth about her grandfather simply does not do it justice.  It is a novel about the human spirit, the connections that families have, and how in times of extreme suffering and devastation that all we seek as humans is the notion that we are belong to the human race either through blood, or a shared experience however difficult that might be.

As Eva travels to Berlin to meet the people in the Jewish Museum, you absolutely feel Eva’s unease and confusion as she realises in reading the letter, she may have uncovered something in Silk’s story that nothing could have prepared her for.  In making this choice, to uncover the truth about her family, that the whole of her own history could be about to change forever.

The narrative moves between Eva’s story and that of József and László, punctuated by pages of questions that József was asked which formed part of his testimony. The pages are placed in the novel without warning or context, and bring into focus both the reality of what the brothers went through, but also the enormity of the devastation that War has brought for everyone.  Life for the brothers during the war is unimaginably cruel, they are treated no better than animals, and their Jewish heritage is what marks them out as fair game for the German soldiers. Men are shot as soldiers ‘test’ their guns, they are forced to work in mines waist deep in water for eleven hour shifts, with only the water that engulfs them as the way of staying alive. They are moved around the country like a pack of animals that have no value other than to serve as amusement and inconvenience for the German officers.

This is not a sanitised, convenient version of the Holocaust experience.  Kim Sherwood unflinchingly challenges us to read the stories of József, László and many others, and to try and understand the unimaginable horror and degradation these people went through simply due to their religion. It makes us see the true inhumanity of war, and dares us to look away, knowing to do so would let these people down.

For me, the most emotional part of the novel was the aftermath of the Second World War.  László and József have been separated, and László, with a girl called Zuzka has managed to get to the Lake District, and become one of the Windermere Boys.  For László and Zuzka, the war may have ended, but they still fall between society’s cracks, not quite fitting in in England, but unable to return to their homeland either.  The relationship between them is gentle and tender, and although both have been changed by what they have seen and experienced, they slowly turn to each other for comfort, to feel a human connection again.  However, when József manages to find his way back to his brother, Zuzka realises that it is József she is truly attracted to.  They are unable to hide their feelings, and as they edge ever closer, László realises that he can do nothing except watch the two people he loves most in the world find each other with devastating consequences for all of them.

Eva is also finding that as she delves deeper into the past her Grandfather fought so hard to hide, that she truly knew very little about him, and his testimony reveals a former life that turns everything she has ever known upside down.  When she visits Berlin to find out more about Silk’s life, she is regarded as a Jew first and a person second and starts to understand the notion of being marked out from the crowd, and the importance of our personal histories as a testament for future generations.

Testament is at times a very difficult and emotional read.  It is a novel which is filled with beautifully poetic and measured prose, which draws you in close and then when it switches to the most horrific scenes described in a straightforward and unemotional way, it is all the more shocking and unnerving. We cannot understand man’s inhumanity to man, and bear our own witness to a world we know can never be allowed to exist again. The history and massive themes it tackles within its pages are complex and the relationships contained in the pages are far from easy. It is due to Kim Sherwood’s immense skill as a writer, that as a reader you become so invested in Eva and Silk’s story that you feel you owe it to them both to not only read it right to the very end, but to also do your own research of the world Silk has tried so hard to forget.

However, for me, at the heart of Testament, and what is so evident in every single page, is a young woman’s desire to truly understand the history of her Grandfather who she loved so deeply.

Follow #youngwriterawardshadow  and @youngwriteryear on Twitter and Instagram to hear more about The Sunday Times/University of Warwick Young Writer Award Shortlist, the authors and what the Shadow Panel think too. 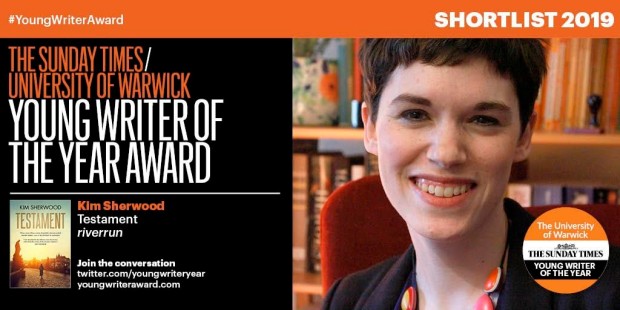 Kim Sherwood was born in Camden in 1989 and lives in Bath. She studied Creative Writing at UEA and is now Senior Lecturer at the University of the West of England. Her pieces have appeared in Mslexia, Lighthouse, and Going Down Swinging. Kim began researching and writing Testament, her first novel, after her grandfather, the actor George Baker, passed away and her grandmother began to talk about her experiences as a Holocaust Survivor for the first time. It won the 2016 Bath Novel Award, was longlisted for the 2019 Desmond Elliot Prize and shortlisted for the 2019 Author’s Club Best First Novel Award.