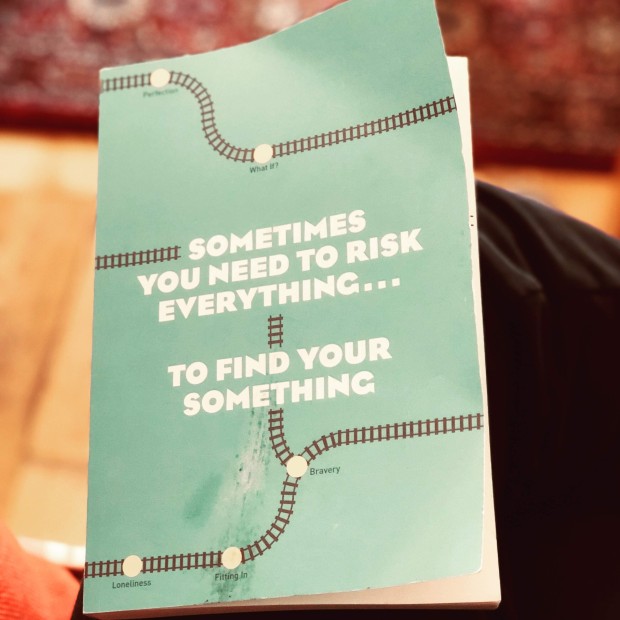 Richard Roper: Something To Live For

All Andrew wants is to be normal.

He has the perfect wife and 2.4 children waiting at home for him after a long day. At least, that’s what he’s told people. The truth is, his life isn’t exactly as people think and his little white lie is about to catch up with him. Because in all Andrew’s efforts to fit in, he’s forgotten one important thing: how to really live.

And maybe, it’s about time for him to start…

You can see from the photo that is at the top of the blog post, that this is a proof that was carried everywhere with me.  I first started reading it at 9.32 on Saturday 25 May in the quiet carriage on the train (spookily very apt as you will discover!) to London Marylebone.  I am telling you this seemingly irrelevant fact as a way to apologise to anyone in that Quiet Carriage, because it made me laugh – loudly, and I didn’t even care I got tutted at – twice!

The thing is, Something To Live For is one of those books.  You know when you have read something so perfect, that when you meet someone else who has read it too, all you need to do is look at each other and say ‘I know’, with an acknowledgement that you are both now part of that club.  It is the book I needed to read at this point in my year, because it is a fabulous, life affirming novel that made me stop and think about how I interact with everyone and the world around me.

The hero of this story is Andrew.  He works for the Local Council and is tasked with finding if people who pass away alone have any relatives or friends who can be informed.  This means that Andrew has to go into houses that are left in the state when the person passed away.  Some are pristine, and some are not, but all of them contain the life and story of the person, and Andrew has to try and find any connections to others that they may have.

In cases where they don’t, Andrew takes it upon himself to attend their Council provided funerals to make sure that someone is there for them.  As far as his colleagues are concerned, every night Andrew goes home to his wife Diane, and his two children, and falls into the usual mundane domestic routines we all know and recognise.

The thing is, there is no Diane and no children.

Andrew has invented them, using a complex set of spreadsheets and fabricated memories and anecdotes to make sure that he blends in seamlessly with everyone else around him.

Andrew’s actual home life is that of a man without a Mum and Dad, an estranged and erratic sister called Sally, a dismal flat where his only solace is his model trains (told you it was spooky!), and the online friends he has made in his model train forum.

One day, a new employee called Peggy starts working with Andrew, and a whole new world that Andrew could never have envisaged, opens out before him.  Peggy bursts into his world and Andrew starts to realise he is drawn to her and that maybe he is entitled to be happy. Except Peggy who is unhappily married, believes that Andrew is a happily married father of two.

In an excruciating turn of events, Andrew’s boss Cameron decides the team building exercise should be a Come Dine With Me experience, with each employee hosting a dinner party at their house. How can Andrew possibly take part and risk his carefully constructed reality come crashing down around him. Should he risk telling his colleagues and more importantly Peggy the truth, and lose everything including her friendship, or say nothing?

This dilemma is intertwined with Peggy and Andrew on their own mission to find a lady simply known as ‘B’ who is in a picture found at the house of one of their clients called Alan Carter. They head off to Northumberland to attempt to trace her, and it is there that away from other people that their relationship changes for ever.

Richard’s writing is pitch perfect the whole way through. His innate skill in making Andrew a character you root for from the very first time you meet him, and the fact you feel every pain, disappointment and glimmer of joy that Andrew does, is testament to his talent as a novelist. It is also witty, clever and filled with passages of such poignant writing on love and loss that it made me stop and re-read them.

I am not ashamed to say that this novel made me cry several times, as Andrew relived his estrangement from his sister and mother, and the awful heartbreaking incident that stopped him living his life. Don’t be fooled into thinking this is simply a light hearted, fluffy novel, because it isn’t. It is a beautifully written story of one man slowly finding his way back to the world he has shut out, and a novel of love, hope and connection.

Something To Live For is a very special novel, that I will insist everyone makes time to read., It has a wonderful, likeable protagonist at the centre, and in a world where we are so reliant on connecting with people via screens, we learn that Andrew and people like him, simply need us to put down our phones and take a minute to look up and speak with the people we might otherwise never see.

Thank you so much to Gigi from Orion for my copy in exchange for an honest review.