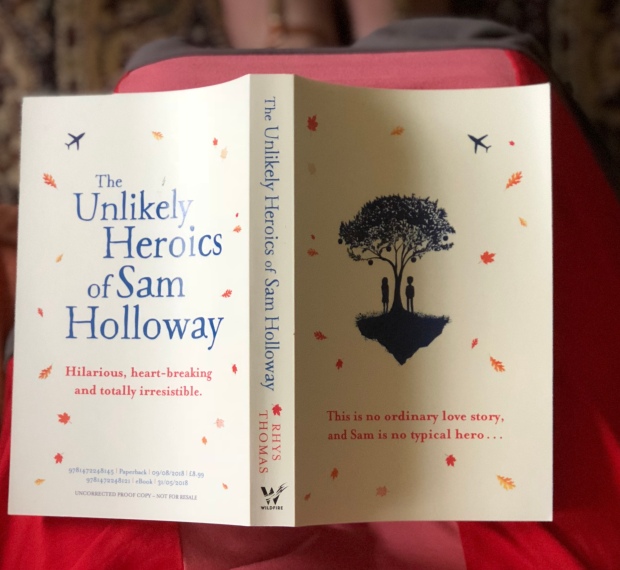 This is no ordinary love story and Sam is no typical hero…but he is a hero.

Charming, quirky, and absolutely bursting with heart, this is the perfect book club read for fans ofThe Rosie Project, A Man Called Ove, and Eleanor Oliphant.

Sam Holloway has survived the worst that life can throw at you. But he’s not really living. His meticulous routines keep everything nice and safe – with just one exception…

Three nights a week, Sam dons his superhero costume and patrols the streets. It makes him feel invincible – but his unlikely heroics are getting him into some sticky, and increasingly dangerous, situations.

Then a girl comes into his life, and his ordered world is thrown into chaos … and now Sam needs to decide whether he can be brave enough to finally take off the mask.

Both hilarious and heart-warming, this is a story about love, loneliness, grief, and the life-changing power of kindness.

“…there will be a moment, just a small moment, when her words fall away and he will see her for all that she is, this incredible force of life that puts an excitement in him every day, because he is lucky, in a way, gifted a unique perspective where he is able to perceive how good life is.”

The idea of a twenty six year old man, working in a Japanese screw factory by day, and solving crime by night is not usually a novel that would appeal to me.

However, I defy you not to fall in love with a superhero called the Phantasm whose utility belt includes a selection of chocolate bars and some fizzy drinks?!  Sam Holloway lives an ordered, measured and seemingly ordinary life.  He has gone through a terrible, life changing Event which meant his love of comics and the superheroes who inhabit them are the only thing that gives him the stability he needs.

After working all day in the factory, where he is a model employee, he goes home, has his tea, and then goes onto the mean streets of his neighbourhood to fight small time crime.  No one has any clue that he does this, but for Sam, it is everything.  Just to add, that not one of these capers goes smoothly, and I promise you that every single one of them will have you laughing out loud!  The Phantasm is the most un co-ordinated, clumsy, kind hearted superhero that you will ever meet.

So far, so uncomplicated.  It isn’t a coventional lifestyle by any means, but it gives Sam the security and comfort he needs.  That is until he meets Sarah. He first notices her in a local bakery, and then in the pub he goes to with his mates Tango and Blotchy.  For so long. after the Event, Sam has put a wall around his heart to avoid any more pain, and now that is in danger of falling down.  Little by little, Sam allows himself to open up to Sarah, and realises that she could be the person he needs to bring him back into the real world. He starts to realise that he is falling in love with her.

The only thing is, that he can’t tell her about his secret night time adventures.  How can he explain to the woman he loves, that at night, he puts on a specially commissioned costume and heads out on his bike or in his car to help the local people?  The wonderful thing about Rhys’ novel, is that you really feel every painful decision that Sam has to make.  You see how absolutely heartbreaking the Event (nope, am not telling you!) has been. and that he is now left with crushing anxiety and a sense that he is left behind struggling with his guilt.

For me, some of the most poignant scenes in the novel were where you see Sam’s thought process and how his anxiety manifests itself in an uncensored stream of consciousness. It is heartbreaking to read, but also gives a real insight into what it must feel like to suffer from this crippling anxiety.  It is during those awful times for Sam, that I wanted to reach into the novel and tell him that everything was going to be okay.

As the novel moves on, Sam is seemingly torn between his need to keep being a superhero, and his frustration at not being able to be completely honest with Sarah.  Unfortunately, when one of the Phantasm’s identity is revealed, it sets Sam off on a course that puts him at odds with himself, and you feel the pain and turmoil he has. From this point on, he has a new battle as he realises that he can no longer hide behind the identity of the Phantasm.  It is interesting to see that the one thing it does it bring out his reckless side, that it unleashes in him all the guilt and pain he has felt, and that he doesn’t know how to cope with the outpouring of grief and emotion that he has held inside him for so long.

Sarah and Sam also have to face the fact that neither of them are being completely honest with each other, as Sarah’s past is threatening to come back to haunt her.  She refuses to tell Sam exactly what her ex has on her, what has made her leave her family and home town and why she constantly changes the topic when it gets too personal.

The Unlikely Heroics of Sam Holloway is an engaging and heart rending read.  It is full of hope and promise, it is about the lengths we go to when we cannot face the reality of our lives, and more importantly about the wonderful things that can happen when we give ourselves permission to live and more importantly, love again.