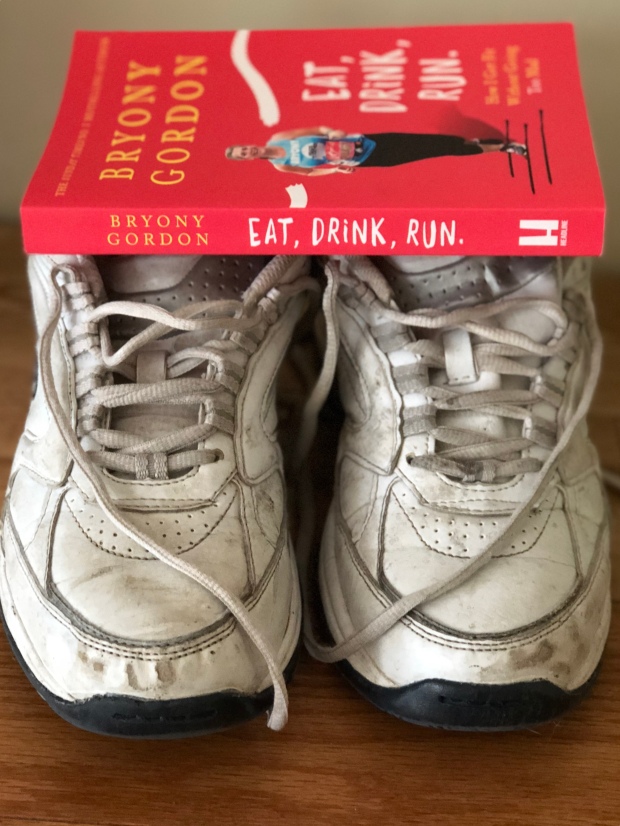 Bryony Gordon was not a runner. A loafer, a dawdler, a drinker, a smoker, yes. A runner, no. But, as she recovered from the emotional rollercoaster of opening up her life in her mental health memoir MAD GIRL, she realised that there were things that might actually help her: getting outside, moving her body and talking to others who found life occasionally challenging. As she ran, she started to shake off the limitations that had always held her back and she saw she had actually imposed them on herself. Why couldn’t she be a runner?

In April 2017, Bryony Gordon ran all 26.2 miles of the London Marathon. In Eat, Drink, Run., we join her as she trains for this daunting task and rises to the challenge one step at the time. Of course, on top of the aching muscles and blistered feet, there’s also the small matter of getting a certain royal to open up about his mental health. Through it all, Bryony shows us that extraordinary things can happen to everyone, no matter what life throws our way.

Thank you so much to Georgina Moore at Headline and Bookbridgr for my advance copy of Eat Drink Run in exchange for an honest review.

I had heard of Bryony and her work with the amazing Mental Health Mates, but had never read any of her books. Eat Drink Run is the story of how Bryony trained for and ran the 2017 London Marathon for Heads Together, the mental health charity established by Prince Harry, Prince William and the Duchess of Cambridge. Believe me, the scene where Bryony inadvertently agrees to run the marathon is absolutely worth the cover price of this book alone!

One of the many things I loved about Eat Drink Run, is that this is not some self-righteous motivational manual, it is a refreshing look at someone just like you or me deciding to make a change in their life. For me, it felt like having a chat with your best friend, over a couple of glasses of wine and that is a real credit to Bryony’s writing.

Having agreed to run the London Marathon, we see Bryony go from elation, to the shocking realisation of the enormity of what she has decided to do. As a backdrop to this, and throughout the book Bryony openly and honestly explains how her own mental health issues impact on how she tackles this immense task. She does not patronise us by claiming she has had some major revelation, and that her way is the only way. It is more as if you were sitting down with one of your friends, and you were talking about how bloody hard and unglamourous training for a marathon really is. Nothing is off limits – from Bryony going to a luxurious boot camp in Ibiza where she has to get help to get into her sports bra, to the rather unfortunate effects certain energy boosting drinks have on her bowels….

Eat Drink Run also gives a voice to the people who Bryony meets through her Mental Health Mates walks. We gain a real insight into what it means to have a mental health issue, and how this is something that does not discriminate, and has such a massive impact on the day-to-day ability of someone to function. For me, this was one of the most poignant parts of the book, as it was an opportunity to really understand what it means to feel like this, and how talking and normalising mental health is the first step to this becoming something in our lives that no longer carries any stigma or prejudice.

Alongside Bryony’s training, and trying to balance all the aspects of her hectic work and personal life, we see how she forms a unique connection with Prince Harry. His willingness to talk to her about his own mental health issues and having to very publicly deal with the death of his mother, brought this topic to the attention of the British public and press. I have to say that the transcript of Bryony’s podcast with Prince Harry is one of the most emotional and moving interviews I have read.

Just as a personal aside, I read the podcast interview during the weekend of Prince Harry’s marriage to Meghan Markle. I was 26 in 1997, and vividly remember William and Harry walking behind Princess Diana’s hearse, an image that broke a million hearts and showed the reality of two little boys who had lost their Mum. To now watch Harry walk to St George’s Chapel with William, and then to see him visibly moved by the sight of his bride, his Mum not there, was an immensely moving and timely backdrop to the interview. I promise you that by the end of that chapter, you will want to reach into the pages and hug him and tell him know how proud his Mum would have been.

Bryony’s journey from a woman who had to battle to get her head out above her duvet, to a runner completing the London Marathon is one that is packed full of humour, honesty and is a whip smart lesson in having the confidence to believe in yourself.

This is a glorious, life affirming book, that captivates from the first page and draws you in completely, willing Bryony to succeed. I am being totally honest when I say, that Bryony’s book has absolutely inspired me. After a period of huge self doubt and believing that all my reading and blogging was pointless, Bryony and the people we meet in Eat Drink Run, have given me to have the courage to keep my blog going (and walk a lot more too!).

To the rest of you – go buy Eat Drink Run!

One thought on “Eat Drink Run by Bryony Gordon”