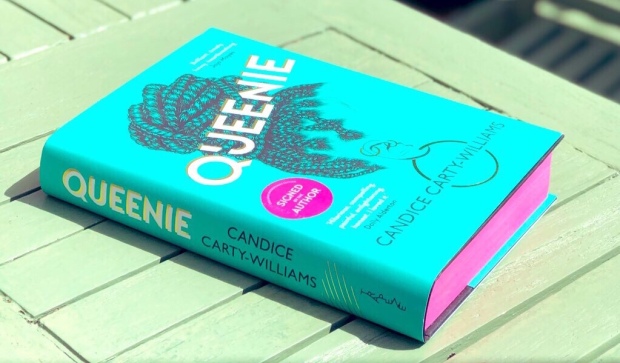 Available from all Good Bookshops and Online

Queenie is a twenty-five-year-old Black woman living in south London, straddling Jamaican and British culture whilst slotting neatly into neither. She works at a national newspaper where she’s constantly forced to compare herself to her white, middle-class peers, and beg to write about Black Lives Matter. After a messy break up from her long-term white boyfriend, Queenie finds herself seeking comfort in all the wrong places.

As Queenie veers from one regrettable decision to another, she finds herself wondering, What are you doing? Why are you doing it? Who do you want to be? – the questions that every woman today must face in a world that keeps trying to provide the answers for them.

A darkly comic and bitingly subversive take on life, love, race and family, Queenie will have you nodding in recognition, crying in solidarity and rooting for this unforgettable character every step of the way. A disarmingly honest, boldly political and truly inclusive tale that will speak to anyone who has gone looking for love and acceptance and found something very different in its place.

If like me, you are on bookish social media (a lot in my case!) you cannot have failed to have heard about Queenie. When it was published in 2019, it was everywhere, and I have to admit that for that very reason, I bought a beautiful teal hardback signed copy, and then put it on my shelf and promised myself I would read it. I didn’t.

When I found out it had been shortlisted for the Comedy Women In Print Prize, it was the perfect time to read it, because all the noise around it had quietened down and it meant that I could now give Queenie my undivided attention.

I am so glad I did, because I loved this novel.

Queenie seemingly embraces and lives life to the fullest – she has a supportive family, a group of quite frankly fabulous friends, a great job and a relationship with Tom. The novel opens with Queenie at a Sexual Health Clinic with her Auntie Maggie, but it transpires she has suffered a miscarriage, and that actually her relationship with Tom is on an extended break, and he doesn’t want anything to do with her.

What is also evident throughout the novel is the amount of casual racism which permeates every part of Queenie’s world. Strangers want to touch her hair and men on dating apps make awful sexual and racist comments constantly. Tom is white, and although his family appear to have no issue with him dating a Black woman, it is their thoughtless and internalised racism that comes to the fore in throwaway comments or behaviour.

Queenie has a brilliant group of friends she nicknames ‘The Corgis’ – the fabulous Kyazike, her kind work colleague Darcy, and the ever analytical Cassandra. Queenie has an amazing and enviable bond with these women, and their WhatsApp exchanges are so natural and real, that it felt as if I was part of the group too! Their sense of protectiveness and being true and real with each other really reminded me of how powerful and needed female friendships are.

Although Queenie seems to enjoy her job on a national newspaper, she is frustrated by their lack of embracing her efforts to talk about wider issues that affect Black people. Gina her boss is exasperated at times by Queenie’s disengagement with her role, but you get the sense that Gina sees Queenie’s potential if only she could too.

As Queenie starts to grudgingly accept that she and Tom are over, she starts to meet other men – Queenie wants sex and is unapologetic about it. Some of the sex scenes in Queenie are very graphic, at times brutal and disturbing, and one experience she has with a man called Guy was really difficult to read. In fact when she goes to the sexual health clinic, the staff think she is a sex worker, and that the extent of her injuries give them concerns as to whether she has had consensual sex or has been assaulted.

The men she encounters are not looking for a relationship, and the fact she is Black is something they almost see as a point on their score card. What becomes evident to the reader as the novel progresses is that Queenie is using sex as a way to try and feel something, a connection, a sense of power, but it is really masking her mental deterioration and subsequent breakdown. There is also the sense that something in Queenie’s childhood is always simmering constantly at the back of her mind, and that is has shaped how she sees her own relationships.

This is what really resonated with me about Queenie – is that this young woman who seemingly has so much to look forward to is trying so hard to be so many things to so many people, but is also dealing with the fact that she is estranged from her Mum because of the actions of another man. Queenie’s world starts to unravel – a man she has been pursued by and slept with alleges she has been harrassing him, she is then suspended from her job, loses her home and is forced to move in with her grandparents.

Her decision to seek counselling is something her grandparents find difficult to accept, but eventually they understand why she has to. For me, Queenie’s grandparents were two of my favourite characters. Their love and care for Queenie was such a powerful thing to read, and the fact that they dealt with her in the only way they knew how- by refusing to let her dwell on what she was going through was really affecting for me.

Slowly by confiding in her therapist Janet, Queenie starts to let her and us as readers into her life, and we see exactly what happened and why she is estranged from her Mum. Little by little, Queenie starts to rebuild her life and when the man who got Queenie suspended at work is found to have lied about their consensual sex, it is finally time for Queenie to take the next steps in life, but this time, she is in control.

As a forty-nine year old white woman, I thought I was not the target market for this book. I was wrong.

Candice Carty-Williams has written a novel that draws you in from the first page, and it is witty, warm, and a joy to read. At times it is undeniably challenging too, and honestly I found some of the sex scenes very hard to read. It made me think so much about the world Queenie lives in, and the reality of life for Black women in Britain today. Queenie is a novel that is many things, it is fast moving, funny, tender and at times heartbreaking too.

What is at the heart of this novel for me is the realisation Queenie comes to as to how important and necessary family and friends truly are. Above all, it introduced me to Queenie and her world, and I very much hope I get the chance to meet her again really soon.