Exploring themes of ownership and abandonment, Eleanor Anstruther’s debut is a fictionalised account of the true story of Enid Campbell (1892–1964), granddaughter of the 8th Duke of Argyll.

Interweaving one significant day in 1964 with a decade during the interwar period, A Perfect Explanation gets to the heart of what it is to be bound by gender, heritage and tradition, to fight, to lose, to fight again. In a world of privilege, truth remains the same; there are no heroes and villains, only people misunderstood. Here, in the pages of this extraordinary book where the unspoken is conveyed with vivid simplicity, lies a story that will leave you reeling.

“There was too much life, it was too fragile, it hung on a finger-point of God.  It was before her, in all its endless maybes – a thousand ways to travel, a trip on the stair, an heir ruined, another child she couldn’t love for fear of loving,”

Often you read a novel and are in awe of the creativity and depth of characterisation that a novelist has revealed during their novel. In A Perfect Explanation, Eleanor Anstruther has brought to life a story that comes from her own family history and this novel is even richer for it.  Eleanor’s Grandmother, Enid, sold her youngest son Ian to her sister Joan for £500.  Having been given permission to write this novel before her father died, Eleanor brings to life her family’s incredible and unforgettable history.

It is told from three viewpoints – that of Enid, Joan and Enid’s daughter Finetta.  The story moves between two timelines, from 1921-1931 and 1964. At the start of the novel, we meet Enid, who is living in a Christian Science nursing home and is waiting for Finetta to make her weekly visit. The other chapters help us to understand what brought Enid to this place, and why she is so estranged from her family.

We learn that after the First World War, Enid has lost her brother and father, and in order for the family to hold onto their title, it is up to Enid to ensure that the family line continues.  Her mother Sybil is unrelenting in her desire to ensure that the family holds on to their title and social standing.  Enid’s desires and dreams are buried in order to ensure Sybil gets what she wants, and she marries the teenage Douglas as a means to satisfy everyone.

Enid’s sister Joan is not married and is really not interested in doing so either, as we later learn she is contented in her relationship with a woman called Pat.  As time moves on for Enid, we see her overwhelmed and emotionally disconnected, a mother of three children, living in Southern England and absolutely bewildered as to how she has ended up there.

To the modern reader, I think we are able to see that Enid is suffering from post-natal depression and is in a marriage that is purely one of convenience. Her husband tries to reach her, but as Enid disengages from him, he instead starts an affair and spends as much time as possible away from the marital home. When her eldest son Fagus has a life changing accident, Enid is consumed by self doubt and anxiety. You really get a sense from the powerful and beautifully understated language that Eleanor uses, that it seems Enid is half inhabiting an ever changing world where everything is going on around her and she is not really present. There is an overwhelming sense of claustrophobia and hopelessness for Enid, and as a reader, at that point, I felt desperately sad for her.

Then one day, unable to live this life any longer, Enid simply gets up, and walks away from it all.

She finds solace initally in Christian Science at Didlington Hall, and falls gratefully into being part of the church community and doing repetitive and mundane tasks which mean that she can block out the enormity of what she has done.  Meanwhile, back at the family home, Donald, Sybil and Joan are left with the damage that Enid has created, and the children are shattered and bewildered by what their mother has done.

As the narrative moves on, the cracks in the Anstruther family come to the fore.  Enid and Joan have no relationship and simply do not have anything in common apart from the children.  After having been away for a long time, Enid decides to return and take back her remaining two children, as Fagus is now in a boarding school that can give him the attention he deserves.

Enid is horrified to realise that Joan provides the stability and routine for Ian and Finetta that she simply is unable to provide, and she attempts to try to take them back.  This for me was one of the most upsetting parts of the novel, as the children are forced to stay with a Mother who really doesn’t understand how to be the Mother they want.  Enid is purely focused on Ian, as the surviving heir. Her desperation to have Ian back and her desire to make sure he absolutely loves her, means that Finetta seems to be the forgotten child, a footnote to the custody case who moves back and forth with Ian but is never really listened to or heard.

I have to say that my sympathy shifted from Enid during the story.  Initially I was shocked by how alone and misunderstood she was, but as the novel moves on, I felt that her desire to have Ian back in her life was more to hold her family to ransom as it emerges she is running out of money, as oppose to a genuine desire to love him.

As the novel brings us back to 1964, and a devastating reunion between the remaining members of the Anstruther family, it seems that things will never be the same again, and Enid will finally be forced to confront the brutal realities of her heartbreaking decisions.

A Perfect Explanation is a novel that looks at a world we have left behind, a world where lineage, familial pride and privilege meant so much more that someone’s happiness.  It is also a brilliant examination of women’s place in society, and how any who did not fit into the prescribed roles laid out for them are seen as being misfits and unstable, as oppose to individuals who were simply trying to live the life they wanted to.

Eleanor Anstruther has written an astounding debut novel that bravely and completely brings to life a difficult family history. It also deftly holds up a mirror to our own world and asks us who are we to judge, when behind closed doors our family may not be as perfect as we like to show to the outside world either.

Thank you very much to Agnes Rowe and Salt Publishing for my copy of A Perfect Explanation in exchange for an honest review.

Find out what my fellow bloggers are saying about A Perfect Explanation by following the Blog Tour. 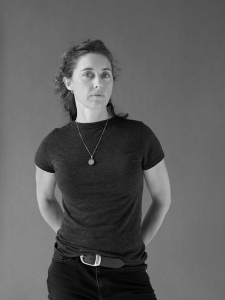 Eleanor Anstruther was born in London, educated in Westminster and read History of Art at Manchester University before travelling the world.

6 thoughts on “A Perfect Explanation by Eleanor Anstruther”